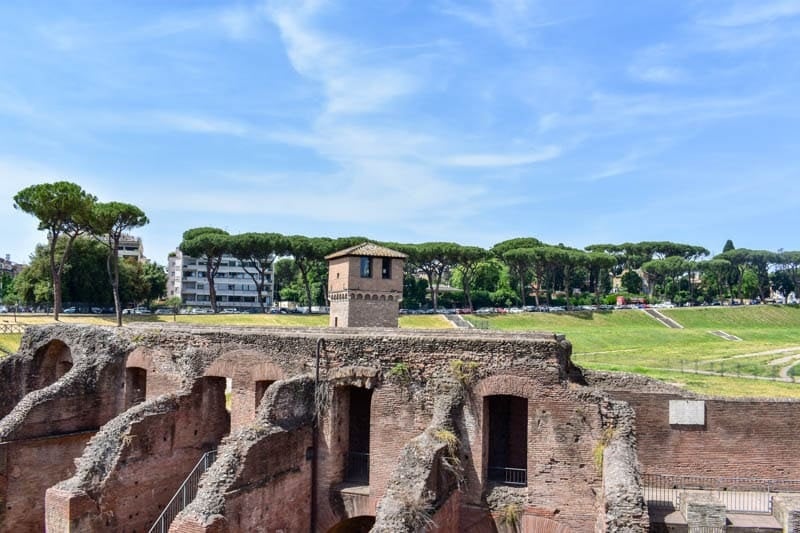 Among the planned visits of Roman ruins, we had noted the Circus Maximus. Less frequented, they have nevertheless a  historical interest.

Discover some information and our opinion with pictures taken during our visit.

What was the Circus Maximus of Rome?

The most common name is Circus Maximus. In Italian it is also used Circo Massimo, while in French it is sometimes written Cirque Maxime. In this article, I write the first two versions, which are the most common.

Its definitive form came with the works carried out under Julius Caesar, then Augustus. It became less used after the construction of the Colosseum but remained a building that hosted events that could not take place in the Colossseum.

What remains of the Circus Maximus?

The first is made up of ruins dating from antiquity.

The other part is the large grassy area that corresponds to the old arena. It is now used for contemporary events such as concerts and celebrations (like the FIFA World Cup victory).

Where is the Circo Massimo in Rome?

The Circus Maximus is located on the street that bears its name: via del Circo Massimo.

It is 0.43 miles from the Colosseum. You only have to walk a short distance in via di San Gregorio to reach it. The Roman Forum is 0.56 miles away. This proximity is logical because during the circus games in ancient times, a “pompa” (which can be translated as “parade”) left from the Forum to the Circus Maximus.

If you are visiting the Colosseum – Forum – Palatine Mount trio in one day, you can finish with a short detour to the Circo Massimo. The visit is either short (10 minutes) if you admire the ruins, or slightly longer (40 minutes to 1 hour) if you take an augmented reality and virtual reality tour.

Is there a fee to visit the Circus Maximus?

Seeing these Roman remains is free. That’s what we did. You have a clear view of the entire ruins and can walk through the arena.

There is also a paying activity accessible only at the level of the ruins surrounded by a fence: a visit using augmented reality and virtual reality. For 40 minutes, it allows, with headphones and glasses, standing in the middle of the remains, to relive the history of the Circus.

Available in 8 languages, including English, the activity allows you to see how the place was built in the past. Buildings are recreated, stalls are present, the Arch of Titus is revived, while a chariot race is improvised.

If you are fond of technology, this augmented reality tour will surely seduce you. Its price is affordable: €12.

Even if the Circus Maximus is not the most visited place in Rome, consider booking your paid visit because the dedicated space is small and fills up quickly. I just tried to book a visit next week (I’m writing the article in July) and the remaining slots are only at the end of the day.

Note that the paid tour is closed on Mondays. I mention this because we came on a Monday with the plan to do it only to find the doors closed when we arrived…

I can’t give my opinion on the Circus Maximus VR tour because we didn’t do it. This is a pity because it looked interesting.

For the free part, the dimensions are impressive. The arena is surprisingly long. Few ruins are still standing. The grass was maintained (which is always better than Largo di Torre Argentina), but no special enhancement of the place is done.

It’s a quick detour from the Colosseum, so there’s no reason not to do it. But it is not a memorable visit. You find more memorable places in Rome. The most popular ruins such as those of Mount Palatine remain your priority to visit!

Denis
As a professional blogger, I take advantage of my flexible schedule to travel a lot. I haven’t been everywhere, but it’s on my list!